Mesenchymal stem cells (MSCs) aggregated into three-dimensional (3D) cellular spheroids are a potent configuration for cell therapy and tissue engineering research and product development (5), and cellular spheroids are a preferred format for many bioprinting applications (10).  Cellular spheroids are essentially micro-tissues that can be manufactured as standardized “living materials” with certain controllable, measurable, and evolving material properties (10). Studies have shown that MSC aggregation into spheroids yield improved in vitro biological functionality over MSCs grown as 2D monolayer; likely due to the 3D tissue-like structure resembling the native configuration of cells in vivo with a microenvironment that allows for direct cell-cell signaling and cell-matrix interactions. MSC spheroids demonstrate enhanced cartilage, bone, and fat differentiation, as well as increased paracrine factor secretion over 2D MSC cultures (1-7). In vivo administration of hMSC spheroids have also shown enhanced therapeutic properties in pre-clinical models of myocardial infarction, bone and cartilage repair, and limb ischemia (3, 5, 8).

Traditionally, aggregates were formed using suspension culture in spinners or shake flasks or in hanging drop cultures (5). The advancement of technologies has allowed one to quickly and easily generate large numbers of spheroids consistent in size and shape using forced aggregation in micro-wells (AggreWells, Stem Cell Technologies), or using liquid handling automation and 96 or 384 well hanging-droplet plates. There are also tools available that allow researchers to mold micro-tissues into interesting shapes such as rods, toroids, honeycombs, or whatever one can dream up (12-13).  While there are multiple methods for creating hMSC micro-tissues, the biggest challenge is reproducibly growing up sufficient hMSCs to create enough spheroids to start an experiment.  For example, if a researcher needs 10,000 spheroids with an average of 1000 cells per spheroid, then he/she will need at least 10 million cells to begin the experiment, which can take weeks to grow (see process flow diagrams below).  If he/she wishes to use 5000, or 10,000 cells per spheroid, then he/she will need 50 million or 100 million cells for his/her experiment.  This volume of cells has traditionally been very costly and time-consuming to generate.
This Application Blog Post will provide a simple protocol to rapidly and economically generate tens of millions of high-quality hMSCs so that researchers can minimize their time spent on routine cell culture and maximize their effort on performing hMSC spheroid-based experiments.

Materials & Reagents
1.      RoosterVial™-hBM-10M cell vial – use cells right out of thaw
2.      RoosterNourish™-MSC – 1 kit
3.      Aggrewell 400ExTM(6-well plate) from Stem Cell Technologies
4.      Aggrewell Rinsing Solution
Cell Seeding and Aggregate Collection
1. Rinse 2 wells of Aggrewell plates with the Rinsing Solution. Aspirate rinsing solution and let dry.
2. Thaw 10 Million (M) hBM-MSCs (RoosterVial™ -hBM-10M) and resuspend cells in 9mL of RoosterNourish-MSC for a total of 10mL.
3. Collect 0.25mL of cell suspension in an Eppendorf tube for cell counts.
4. Centrifuge remaining cells at 200xg for 5 minutes.  Count cells while cells are spinning.
5. Aspirate media and resuspend cells with enough volume of fresh media to bring cells to 2.5 million viable cells/mL,
6. Following manufacturer’s instructions, seed 2mL of cell suspension into each of the 2 Aggrewells drop by drop to distribute cells evenly into the microwells.
·         NOTE: We have found that plate centrifugation (per instructions) is not required for hMSCs.
·         NOTE: Each of the 2 wells will generate 4700 aggregates consisting of 1000 cells per aggregate. (manufacturer’s protocol) (Figure 1 below)
7. Incubate plate in 37oC incubator for 6-18 hours to allow cell aggregation.
8. Collect aggregates (Figures 2) from wells into a 15mL centrifuge tube by gently flushing the aggregates out of the microwells. Rinse once with RoosterNourish-MSC to collect remaining aggregates and pool into the 15mL centrifuge tube.
·         NOTE: Tip plate towards you and use a wide bore pipette tip to wash the well until you see >90% of aggregates dislodged and floating.
·         NOTE: Do not allow settling for >30 min as aggregates will agglomerate and begin to fuse together.

hMSCs spheroids readily fuse with neighboring spheroids when multiple are incubated together in RoosterNourish-MSC at 37oC. The figure on the right shows hMSC spheroids undergoing agglomeration and fusion to form random 3D structures within 6 hours of incubation.  With the use of 3D bioprinting, the placement and organization of micro-tissues can be controlled precisely to create complex, uniform tissues (14).

Simple molding techniques can also be used to control the emergent form, and potentially functions, of hMSC spheroids as higher-order structures and custom shapes such as rings or rods (Figure 3) can be created. It is possible for these macroscopic shapes to be assembled into functional structures to eventually perform some task.

The process flow diagram (PFD) below shows the comparison of hMSC expansion using RoosterBio hMSC and media systems or other commercially available hMSC systems to generate the number of cells required for MSC aggregate formation. 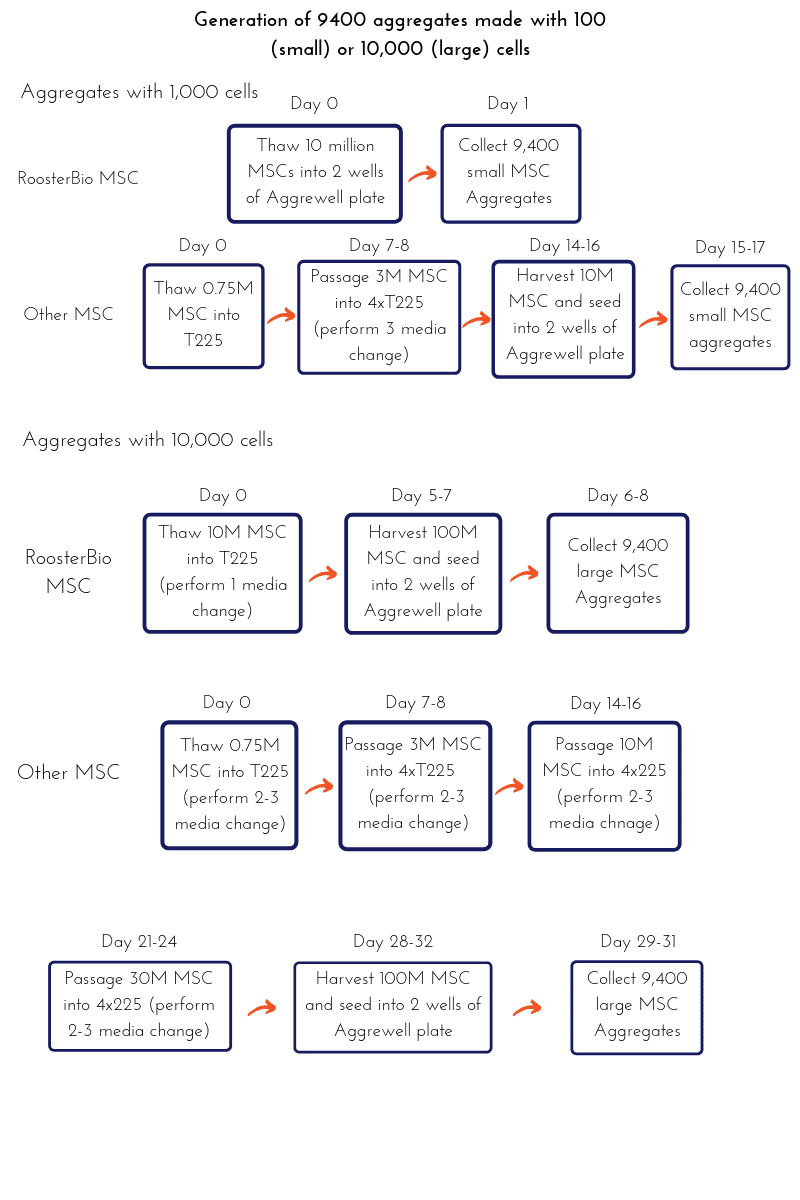 *Note: For generating 10,000 cells per aggregate, 3 wells of Aggrewell 800 should be used.
hMSC aggregates can be generated as quickly as overnight, or within 1 week, by using RoosterBio hMSCs (straight out of thaw or by expanding them for 1 passage prior to use). Most commercial hMSC products are offered at merely 0.75 million cells per vial, and they require 2-3 weeks of expansion time just to obtain 10 million cells and much longer for 100 million cells. The time and raw materials cost required for generating 9400 spheroids containing either 1000 or 10,000 cells/spheroid is modeled in the graph below (Figure 4). In comparison, the RoosterBio hMSC system allows significant time savings in addition to reduced cell expansion cost and contamination risk associated with prolonged cell expansion.

Since the ability to forward engineer complex macroscopic tissues by leveraging emergent behaviors of hMSC spheroids is now possible, an abundant source of cells along with a robust cell expansion process is required to allow for both economical and time-effective tissue engineering research and product development. The process flow diagrams above demonstrate that the robust expansion of RoosterBio high volume hMSCs for a spheroid generation will help researchers save significant amounts of both time and money. Scientists and engineers can now focus their efforts on performing experiments with hMSC spheroids, minimizing routine cell expansion work, and therefore, produce experimental data more quickly for rapid publication and product development.