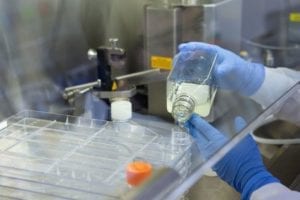 Human MSCs are the single most used cell source for tissue engineering and regenerative medicine applications, and clinical trials involving hMSCs have outpaced all other cell types in recent years (see here and here).  However, despite indications of clinical effectiveness (see here and here), there is repeated news of the failure of high-profile MSC trials to demonstrate efficacy in a number of therapeutic applications (see here, here, here, and here).  It has been suggested that the large amount of intra- and inter-donor variability in the MSC populations used in these trials may be responsible for their falling short of expectations despite highly encouraging in vitro and in vivo pre-clinical data.

A team led by Steve Bauer at the US FDA has reported that large variations in proliferation, morphology, differentiation capacity and cell surface marker expression profiles exist within any population of MSCs and that these intra-population heterogeneities may arise as a result of long-term in vitro culture and the in vivo microenvironment (Free article available here.)  In addition, their work has demonstrated that there are inherent differences in MSCs from donors of similar age, and they have noted the “potential for other donor-related factors in MSC biological variability, which may play a role in their clinical usefulness or performance in various model systems.” Other research groups have also corroborated donor-related differences in MSC function, including in response to stimuli, such as challenge with inflammatory cytokines (see here and here).  A review article on developing cell therapy manufacturing processes reinforces that several donors should be tested prior to implementing; 1) changes in media composition (such as serum reduction/elimination or addition of growth supplements), 2) extensions of the product dose population doubling level (PDL), or 3) changes in lot size during scale-up.

One highly publicized MSC clinical trial failure was a Phase III trial using Prochymal (an MSC product from Osiris Therapeutics) to treat Graft versus Host Disease (GvHD). The scientific community initially failed to probe the causes for failure of this trial, until Jacques Galipeau of Emory University published a comprehensive failure analysis in 2013, more than three years after the trial’s failure.  Prolific stem cell blogger, Alexey Bersenev, has done an excellent job summarizing the Cytotherapy paper on his blog, but in short, the analysis points out that MSCs have huge inter-donor variability in terms of their immunoregulatory function, a function that underlies their therapeutic action in GvHD and a number of other diseases.  Galipeau states that while the ISCT’s minimal criteria for MSCs are sufficient for cell identity, they have no relevance to the cells’ function and potency.  While the aforementioned markers are often uniform across individual donors, MSC response to stimuli is not, and therefore, it is an incorrect assumption that MSCs are “functionally equivalent” from one donor to another.  (We see such functional differences between RoosterBio MSC lots, and between donors of similar age as well.)  Thus, Galipeau concludes that a “potency bias” may have contributed to the failure of the Prochymal trial.  Furthermore, since adult stem cells have limited expansion capacity, it is necessary for commercial cell therapies to have manufacturing processes that enable a consistent product from multiple donors.  Establishing these technologies will remain a challenge for the field moving forward.

Even with the consensus amongst the scientific community, that donor variability is a critical component to address for the success of cell-based therapies, the majority of scientific publications still use just a single donor to support new discoveries.   Clearly, to ensure the robust production of functional MSC products over a range of applications, experiments should be conducted and systems validated with MSCs from several donors.  It has been reported that best practices to qualify a manufacturing process should include “at least 3-5 donors”, and it is likely that proper validation will require many more.  It is for this reason that RoosterBio provides hMSCs from a variety of donors across a range of ages and sexes, and also provides functional data (immunomodulatory potential and angiogenic cytokine secretion levels) for each of these donor lots so that our customers can perform robust comparative studies.

The jury is still out on how many donors the regulatory agencies will require in clinical testing in order to get to market with an hMSC drug product.  This will likely depend on how many donors are expected to be necessary to supply the market with commercial quantities of product on a yearly basis.  At that point, donor selection will increase in importance.

Keep an eye out for a follow-up blog post on this topic.