Human Mesenchymal Stem/Stromal Cells (hMSCs), from bone marrow or other tissues, are poised to have the most significant impact on Regenerative Medicine compared to any other single cell type.  This is due to their ability to be utilized across multiple therapeutic indications due to the wide-ranging functional nature of the cells (1-3).  hMSCs are not only capable of differentiating into tissue-specific cell types, but also have angiogenic, immunomodulatory, anti-inflammatory and anti-bacterial abilities (4).  hMSCs are true Tissue Repair Cells – setting the stage for all phases of wound healing and tissue repair: promoting new blood vessel growth, reducing inflammation to aid healing, secreting several mitogenic factors important for tissue building and stimulating tissue-specific stem cells.

However, hMSCs have traditionally been challenging to source in significant volumes and at sufficient quality levels, hindering the advancement of the science into medical products.  At RoosterBio, we focus on transitioning hMSCs from a scarce into an abundant resource, and we achieve this by borrowing best practices from the Manufacturing Sciences and applying them towards the grand challenge of producing billions of hMSCs, with critical quality and functional parameters in place, and at costs and volumes that enable the rapid and wide-spread adoption of hMSC technology into clinical practice.

RoosterBio came to market 2 years ago with hMSC cell and media systems that include a highly efficient hMSC bioprocess expansion media that simply and consistently produces greater than 100x expansion of cells with 8-10 days of culture. Our cell and media system was designed for a “batch” culture process (no media exchange required between passages), removing labor-intensive and costly media exchanges, and enabling rapid expansion with little in process intervention (thus fewer risks for contamination).  While the cell and media system has now been used in several translational and high impact publications (5-8), the expansion medium does utilize low levels of high-quality bovine serum to maximize the performance and robustness of the overall system.

In recent years, the field has been shifting towards xeno-free (XF) cell and media systems to remove any remaining safety issues related to xeno-sourced animal components (9-13). Furthermore, our customers have been requesting XF expansion options. We have listened to our customers and spent the last year developing and optimizing a fully XF media formulation based on our innovative bioprocess media platform.  The goals of this media were to remove all xeno-sourced raw materials from the formulation while maintaining all hMSC functional properties, as well as the economic and production efficiency of our initial bovine serum-containing (BSC) media formulation.  We are now ready to commercially launch our XF media to advance the industry, and this blog post will outline the initial work we have performed to evaluate the comparability of expansion, cost and functional properties of hMSCs expanded in the new XF media compared to our flagship BSC media.

For the purpose of this blog post, we will be comparing RoosterBio hMSC products expanded in either our initial bovine serum containing  RoosterNourish-MSC, or our new xeno-free RoosterNourish-MSC-XF formulation.

Cell expansion. RoosterBio hBM-MSC was expanded in BSC Media and XF Media. Frozen cells were thawed and plated in triplicate at 3,000 cells/cm2 in T-75 flasks and cultured for 4 days. At 4 days, cells were harvested with TrypLE (Gibco) and cell number and viability were determined on a Nucleocounter. These cells were used for the analyses below or plated again for further expansion.

Cell surface marker expression. To determine if the cells grown in XF Media were capable of expressing MSC markers, hBM-MSC expanded in both BSC and XF Media were plated and incubated in DMEM/10% FBS for 5 days prior to flow cytometry.

Immunomodulatory function. Induction of indoleamine 2,3-dioxygenase (IDO) activity by exposure of hMSCs to the pro-inflammatory cytokine IFN-γ is central to the immunosuppressive function of hMSCs (14,15). See here for a blog post on this topic. hBM-MSCs were expanded in BSC and XF Media (Donors 1 and 2) or XF Media alone (Donor 3), harvested and plated in RoosterBasal-MSC medium (SU-005) with 2% FBS at 40,000 cells/cm2. After 18-22 hr of incubation, cells were treated with IFN-γ (10 ng/ml) for 24hr±1hr. The cell supernatant was collected, and the kynurenine concentration was measured using a spectrophotometric assay and normalized to number of cells and days of incubation to obtain the amount of IDO secreted (expressed as pg kynurenine secreted per cell per day).

Angiogenic cytokine secretion. hBM-MSCs were expanded in BSC or XF Media, harvested and plated in RoosterBasal-MSC Medium with 2% FBS at 40,000 cells/cm2. After 24hr±1hr culture supernatant was collected and assayed for FGF, HGF, IL-8, TIMP-1, TIMP-2 and VEGF concentration using a MultiPlex ELISA (Quansys). Cytokine concentration was normalized to the number of cells and days of incubation to obtain cytokine secretion rates.

Cell expansion. A key characteristic of RoosterBio hMSC cell and media systems is rapid cell expansion with a guaranteed 10-fold expansion within 7 days. In engineering our XF Media system, we aimed to preserve this hMSC expansion profile.  hBM-MSCs display rapid and comparable growth in both our BSC Media and the new XF Media formulations, with similar doubling times and expansion rates.  We see the typical variability across donors, but all donors are harvested at greater than 30,000 cells/cm2, after plating at 3,000 cells/cm2, within 5 days (Figure 1). hBM-MSC growth over 2 passages yields greater than 1 billion cells using both our BSC and XF Media (and 10M cell product vials) in less than 2 weeks (Figure 2), leading to tremendous economic benefits (described below). 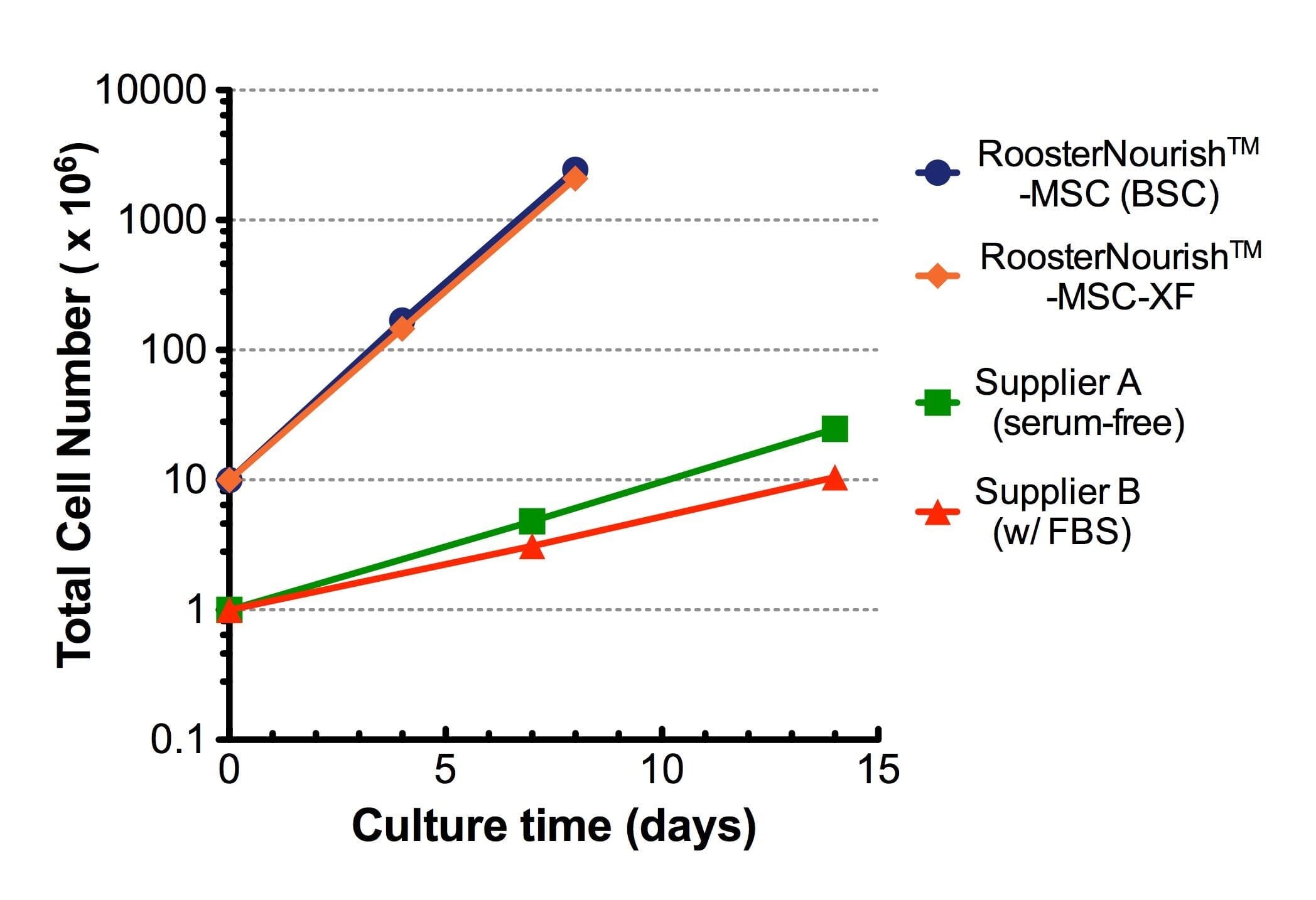 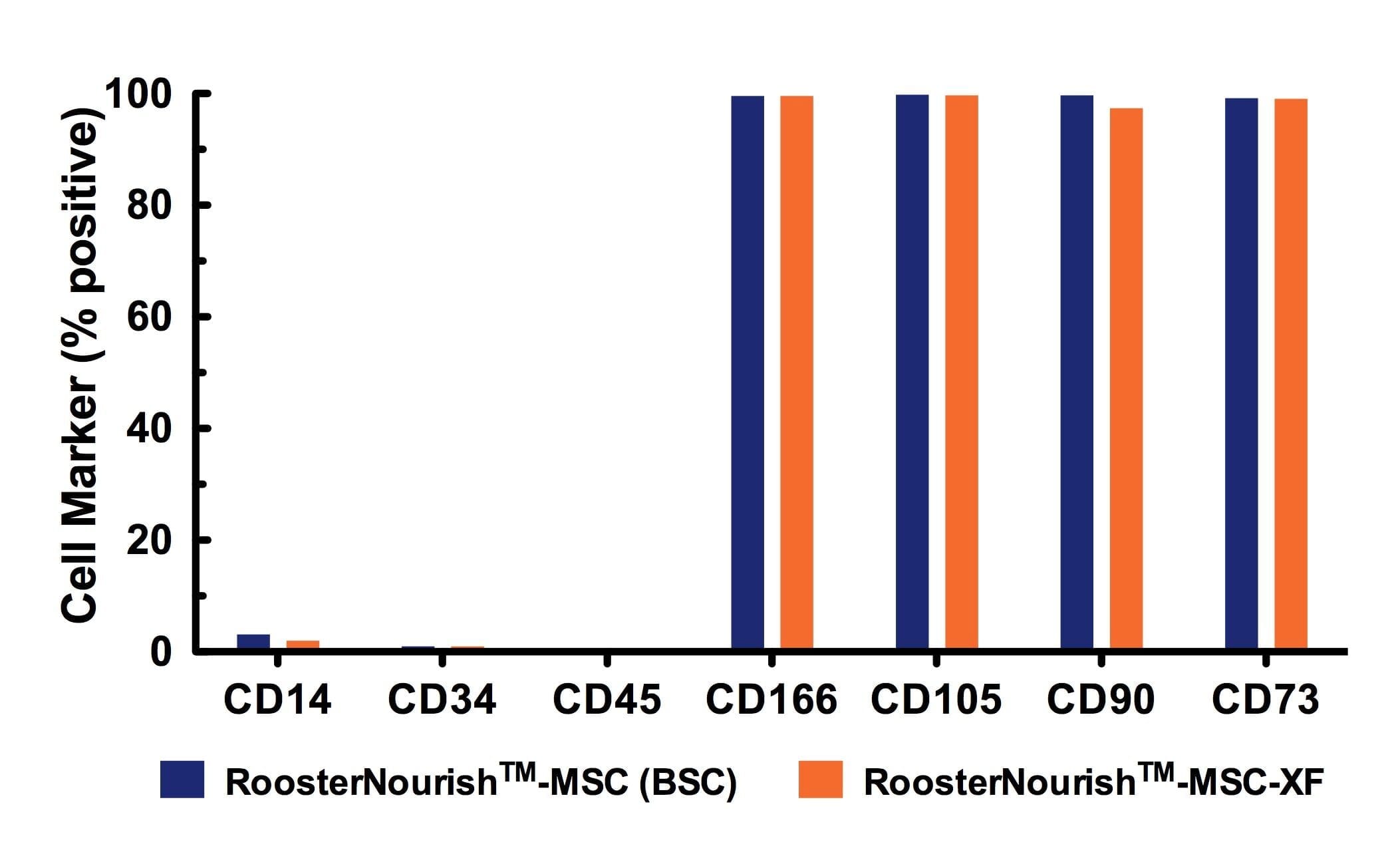 Figure 3. XFMedia does not change hMSC cell surface marker expression.Cells from both media types were >95% positive for CD166, CD105, CD90 and CD73 and <5% positive for CD14, CD34 and CD45. Identical results were obtained with other Donors 1 and 3 (data not shown). 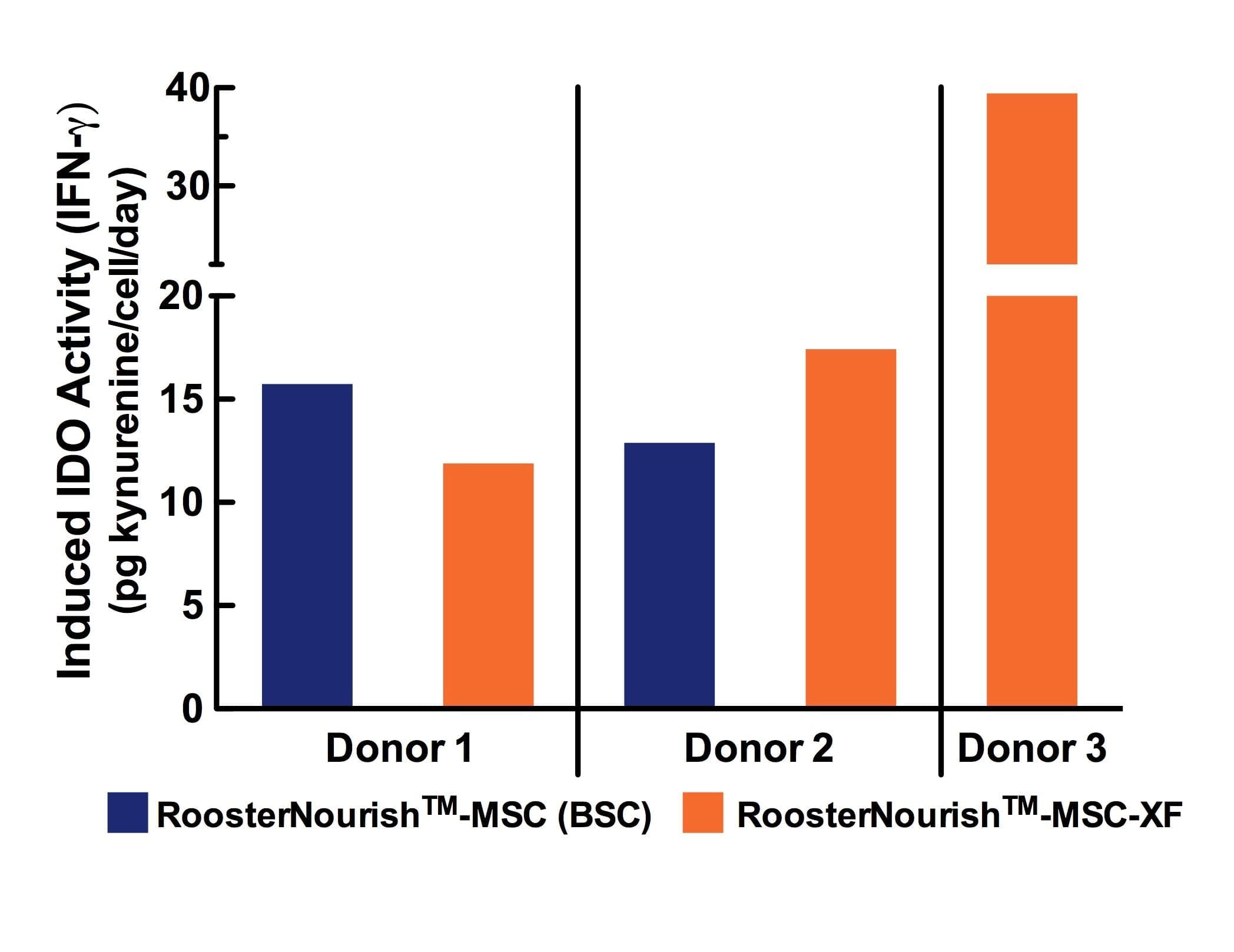 Figure 4. Immunomodulatory activity of hMSCs is similar in BSC and XF Media. Donors that were expanded in both BSC and XF Media in parallel showed similar IDO activity after IFN-γtreatment. All Donors that were expanded in XF Media showed inducible IDO activity (not shown). The IDO activity for untreated cells was from 0 to 0.12 pg kynurenine/cell/day (not shown).
Angiogenic cytokine secretion profile. hMSC achieve their therapeutic effects primarily by secreting a plethora of biomolecules that influence many biologic processes (2,3). We assay the secretion of bFGF, HGF, TIMP 1, TIMP 2, IL-8, and VEGF via multiplexed ELISA analyses as part of our standard QC assays for each hMSC lot we manufacture. We assayed cytokine secretion of 2 donors grown in XF Media, two of which were also assayed after expansion in BSC Media (Figure 5). Comparable cytokine secretion profiles were observed for cells grown with XF and BSC Media, all within donor-to-donor variation. 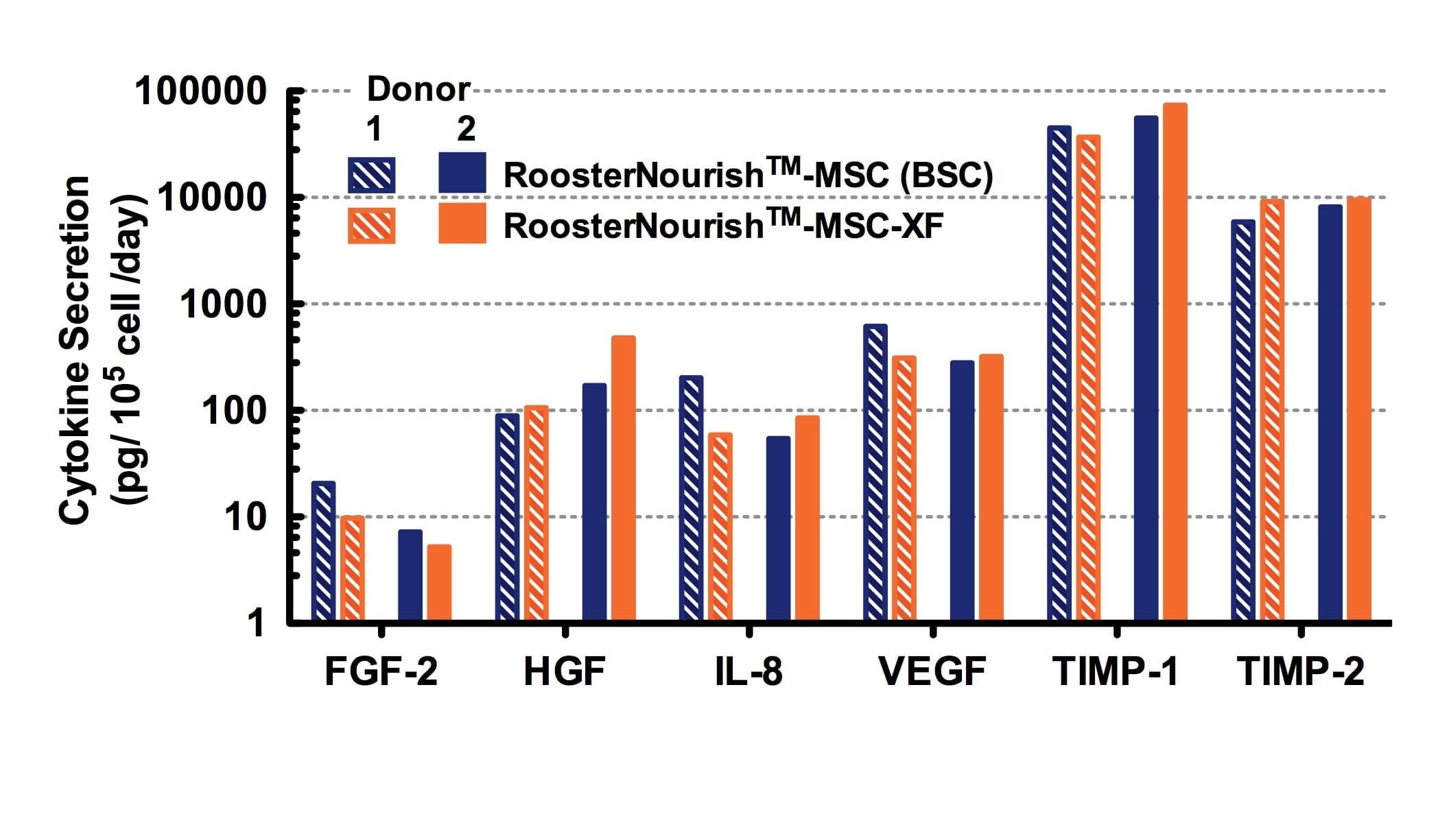 The time and economic savings that both RoosterBio BSC and XF Media formulations afford are the major factor in customers’ switching to RoosterBio hMSC culture systems.  Using the yield and labor data from Figure 2 enables the demonstration of significant cost and time savings for generating 100 Million cells for applications or experiments. These innovative RoosterBio cell and media systems help turn scientific experiments into commercially feasible technologies for implementation.
The most significant aspect of the cost analysis is the savings in media volume.  Media has always been a major cost driver in biomanufacturing processes. Just as bioprocess innovations have enhanced the productivity in monoclonal antibody production and driven exponential cost savings in biotherapeutics, we are driving similar efficiencies with our bioprocess media systems.  The key is media productivity, and when the metric of “Millions of Cells produced per Liter of Media” is evaluated, the differences are illustrative of massive manufacturing enhancements. Figure 7 shows that there is essentially a 9x enhancement in million cells produced per liter of media utilized in culture expansion with RoosterBio media systems versus others. 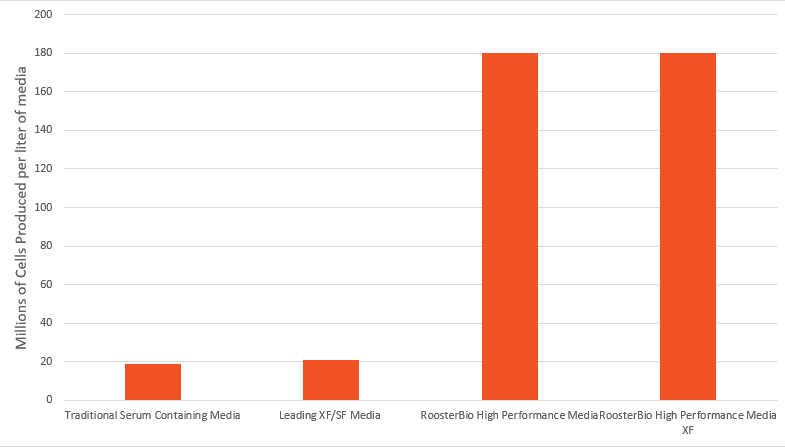 Of course, Quality is always the most critical metric, and if cell functionality is compromised, then any cost enhancement cannot be justified.  However, the functional data we have generated clearly shows that hMSC functions are maintained in our systems.  Our aim in commercializing these systems is to enable the next generation of medical devices that include human stem cells to rapidly progress through product development and clinical development.

We believe we are seeing the dawn of a new era of productivity and product development in the Regenerative Medicine field.  If there are any other innovations you think will have a dramatic impact on the field, please comment below.