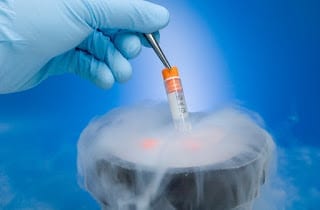 Human mesenchymal stem cells (hMSC) are currently in use in over 400 clinical trials and are critical components of tomorrow’s cell-based products and devices (1, 2, 3). The secretion of biomolecules by hMSC influences many biological processes and is thought to be central to the mechanism of action. Since widespread clinical use of hMSC and cell-based therapies with positive economic outcomes will be facilitated by frozen storage, cryopreserved hMSC must maintain high levels of biological function upon thaw.  Additionally, while hMSC have an excellent clinical track record in terms of safety, efficacy data has been difficult to come by, suggesting that more standardized cell formats are needed.  This too could be addressed by effective means of cryopreservation, allowing off-the-shelf hMSC products to be widely used in Regenerative Medicine, Tissue Engineering, and for 3D BioPrinting of cells and tissues.

To date, there have been conflicting results on the impact of cryopreservation on hMSC function.  The Galipeau lab showed that cryopreserved MSC has impaired immunosuppressive function in response to the pro-inflammatory cytokine, IFN-γ (lower IDO response, and decreased T-cell suppression) relative to proliferating cells (5, 6). The LeBlanc group similarly found that cryopreserved hMSC have reduced responsiveness to IFN-γ, decreased the production of anti-inflammatory mediators, and impaired blood regulatory properties (7). In contrast, other studies support the use of cryopreserved hMSC.  The Mueller lab showed that cryopreservation of hMSC did not change the cells’ immunomodulatory activity, viability, or differentiation (8). The Weiss group also performed in vivo tests of thawed hMSC and found that “in an immunocompetent mouse model of allergic airways inflammation … thawed MSCs are as effective as fresh MSCs.” (9)  The difference in results is likely due to differences in the cryopreservation formulations, controlled rate freezing protocols, and how the cells are thawed and handled before implantation.

To address the critical issue of cryopreservation in our hMSC systems, we compared the biological activity of RoosterBio hMSCs from 2 donors either (a) with cells straight out of cryopreservation (THAW) or (b) with cells that had been in culture for at least 5 days (FRESH), while controlling for PDL.  Based on the literature, we established a conservative hypothesis for this study that cryopreserved hBM-MSC would exhibit diminished immunosuppression and altered angiogenic cytokine secretion compared to proliferating hBM-MSC in response to challenge by inflammatory cytokines. We tested this hypothesis with RoosterVial™, produced with GMP-compatible and scalable manufacturing processes, by comparing the immunomodulatory activity and angiogenic cytokine secretion of proliferating (FRESH) to cryopreserved and thawed (THAW) hBM-MSC.  By presenting the results of this study, we hope to provide additional data points for the industry on the use of cryopreserved, off-the-shelf hMSCs for Regenerative Medicine, Tissue Engineering and 3D BioPrinting.

Materials & Reagents:  Cell culture reagents, excluding RoosterBio materials, were purchased from Life Technologies. Chemicals and reagents for kynurenine measurement were from Sigma. Cultureware was from Corning.

Cell growth and cryopreservation:  Cells were plated at 3000/cm2, grown in RoosterBio RoosterBasal™-MSC, harvested with TrypLE, centrifuged and resuspended for counting (Nucleocounter). hBM-MSC were resuspended in Cryostor CS5 (BioLife Solutions) at 1-3 x106/ml and frozen in a CoolCell (Bioscision) to -80oC before transfer to the vapor phase of liquid N2. Cells were cryopreserved for ~2 weeks. Thaw was done in water @ 37oC until a small amount of ice was present. Room Temperature media was added dropwise, and the cells were centrifuged and resuspended in Media for counting.

FRESH vs THAW hMSC: For FRESH hBM-MSC, cryopreserved cells were thawed and cultured for 5-7 days in RoosterBio RoosterBasal-MSC before functional assays (Figure 1).  Length of culture was based of PDL, so that PDL of cryopreserved and fresh cells was comparable (Table 1).  For THAW hBM-MSC, cells were thawed, resuspended in RoosterBio RoosterBasal-MSC, and plated immediately for functional assays.

Immunomodulation assay (IDO assay): FRESH or THAW cells were plated at 40,000 cells/cm2 into 6 well plates in Basal Media + 2% FBS, allowed to attach for 4 hrs, and treated with vehicle, or IFN-γ (10 ng/ml), or IFN-γ + TNF-α (10 ng/ml ea.) for 24 hrs ±1hr. The cell supernatant was collected and analyzed for IDO activity and angiogenic cytokine secretion.  IDO activity was measured by determining the levels of kynurenine (kyn) in the culture media.

Angiogenic cytokine secretion: The levels of bFGF, HGF, IL-8, TIMP-1, TIMP-2 and VEGF was measured in the culture supernatant from the immunomodulation assays using a MultiPlex ELISA (Quansys).

Cryopreservation and thaw do not affect the induction of IDO by IFN-γ and TNF-α: Immunomodulation is an essential part of the in vivo therapeutic role(s) of hMSC. (4, 11) IDO activity in both FRESH and THAW hBM-MSC was induced by IFN-γ, with a synergistic response in the presence of both IFN-γ and TNF-α (TNF-α alone did not affect IDO activity, not shown). There was no statistical difference between THAW and FRESH for either IFN-γ or IFN-γ + TNF-α treatments (Figure 2) suggesting that cryopreservation does not impair the immunomodulatory potential of hBM-MSC.

For more consistent clinical results, and for broader utility (bioinks, tissue engineering), cryopreservation of hBM-MSC is advantageous. However, cryopreserved hBM-MSC must maintain biological function upon thaw and use. In the work described here, we addressed the hypothesis first set up by Francois et al. (5) that:

We tested this hypothesis with RoosterVial, produced with GMP-compatible and scalable manufacturing processes, by comparing the immunomodulatory activity and angiogenic cytokine secretion of proliferating (FRESH) to cryopreserved and thawed (THAW) hBM-MSC.

We found that for two widely used in vitro tests of hMSC biological function that there was no difference in hBM-MSC biological activity when comparing proliferating cells to those directly out of cryopreservation.  IDO activity for both FRESH and THAW hBM-MSC was induced by IFN-γ ±TNF-α, and the responses of THAW and FRESH were comparable. In addition, basal angiogenic cytokine secretion and secretion changes in response to IFN-γ ±TNF-α secretion were comparable.

A caveat to these experiments is that we performed a relatively small study with two donors and cell lots. These results need to be confirmed with cells similar to RoosterBio’s (i.e. produced using scalable, GMP-compatible processes) in a larger study. For example, in vitro tests, such as a T-cell suppression assay, and, most significantly, in vivo assays are needed. If verified, these results may support widespread use of off-the-shelf hBM-MSC in the clinic and the laboratory.