Fall is almost here, and that means it is Cell Therapy Bioprocessing and Manufacturing conference season.  This year, it started a few weeks earlier as conference organizer CHI put together a Cell Therapy BioProduction session as part of their Annual BioProcessing Summit in Boston from August 18-22.  It is always great to see new conferences including Cell Therapy content, as it shows the maturation of the field.  There is now a “market” that the organizers believe is worth creating content for.

CHI was kind enough to invite RoosterBio to give the kick-off presentation, so I was able to get re-immersed on all that is new and improved in Cell Therapy Manufacturing Scale-up.  This blog post is meant to share a few of the interesting observations from the meeting and will focus on highlights from the vendor exhibits (i.e. product innovations) and the posters.  The next blog post will share some take-homes from the talks.  There were indeed some valuable and exciting new reports that I want to communicate.

One key observation is that, while it is still my belief that most of the Allo-products are currently manufactured in 10-layer culture vessels (see above pic), most of the presentations focused on the next generation bioreactor-based processes.  There will continue to be a major shift over the next few years to more automated platforms such as these.

Products on Display for BioProduction of Therapeutic Cells

I always find it worth noting what products the vendors have on display, as they will be developing products based on requests from the market – so more new products displayed means “growing market”, which turns into better tools available for everyone.  Interestingly, even at a general BioProcessing conference, there were several booths with Cell Therapy-focused products, and there were 3-5 posters (out of maybe 30) on the scale-up and processing of human MSCs (hMSCs).

There were a few product innovations and focused product areas among the vendors that I want to highlight here (and we are not getting paid for this, I promise – no sponsorship at all).

·         Pre-sterilized and ready-to-use microcarriers.  Both Pall/Solohill (see pic) and Corning now offer these products in bottles, but more importantly, in closed system bags ready to seed into a bioreactor system.  Microcarriers in the past had to be prepared and autoclaved by the end-user, creating work and yet another set of variables to control when trying to implement this technology.  By providing pre-sterilized microcarriers that are QC’d for efficient cell attachment (I am assuming this QC step; I will try to confirm that), this takes one less process step out of the hands of the process development scientist and makes an implementation that much simpler.  This is an important advancement in the field.

·         PBS Biotech reported hMSC densities (expanded in their bioreactors) consistently north of 1 million cells/mL, and up to 3 million cells/mL in a serum-containing media.  These numbers are a good 10-fold greater than any number published or presented just 5 years ago, and the highest and most consistent I have seen presented to date.  It is unclear if the reason they achieved these targets was due to the microcarrier and media combination, their novel low shear bioreactor design, or just plain good bioprocess engineering – likely a combination of all three.  In any case, it is a significant achievement, and it demonstrates that it can be done.  Other vendors will now be trying to beat it, and cell therapy companies will be trying to implement it.

·         Vendors are beginning to focus, at least some, on the post-expansion/downstream processing (microcarrier removal, cell concentration) of the cells as well.  Millipore had a presentation and a poster that discussed microcarrier removal using single-use filters and the concentration of hMSCs post-harvest using scalable tangential flow filtration (TFF) technology – both with good post-processing viability and recovery.  See the poster summary below.  Downstream processing continues to be an under-appreciated aspect of the field and cannot be an afterthought to scale-up culture.  If you scale your expansion to several hundred liters before beginning to think about how you will process the massive cell volumes you have, it could set your program back over a year while these technologies are developed and integrated into the manufacturing process.  It is good to see these aspects of manufacturing get some focus here.

There were 3-5 posters (out of maybe 30) on the scale-up of and processing of hMSCs, and while there was content in the sessions, I didn’t notice any autologous or immunotherapy-related posters.  I am pretty sure all of the Cell Therapy-related posters focused on the microcarrier- and bioreactor-based expansion of hMSCs, but the Millipore poster had additional detail around the post-expansion/downstream processing (microcarrier removal, cell concentration) as discussed above.  All of these posters were created by vendors (not therapeutic companies) and these included:

·         Corning’s BioProcess group demonstrated efficient hMSC expansion on their new microcarriers in serum-containing media.  They showed that the hMSCs could expand to good cell densities per microcarrier (30,000 – 70,000 cells/cm2) and maintain viability well above 90%.  hMSCs had normal flow marker profile and normal karyotype.  This work was performed in small scale glass spinners and demonstrates (as others are showing), that hMSCs can maintain their basic phenotype when the expansion is performed in dynamic culture conditions.  There were no functional readouts reported.  I was surprised that there wasn’t data in their serum-free hMSC media, but overall, their microcarrier products look good.

·         Millipore’s poster was on microcarrier expansion of hMSCs, but at much larger scales, to show-off their Mobius bioreactors.   They showed that they could scale-up from 3L to 50L in single-use bioreactor systems and get similar growth curves and that they could achieve 10 billion cells in their 50L bioreactors (suggesting densities of ~200,000 cells/mL).  Expanded cells were analyzed for flow markers (normal), and they also added the tri-lineage differentiation assays (all normal).  Their data shows that scale-down suspension conditions can scale up and that the MSCs retain both identity and the ability to differentiate even at a 50L scale.  Interestingly, they showed methods for using dead-end filtration using a single-use Opticap filter with a 100 um screen to separate the trypsinized hMSCs from the microcarriers.  They were able to perform the microcarrier separation without loss of viability and with a solid recovery of over 90%.  This is definitely a technology that others are looking for, so I was happy to see this.  They also demonstrated the use of a flat sheet TFF for the volume reduction and washing of the hMSCs after microcarrier separation – again, with good results on viability and recovery. 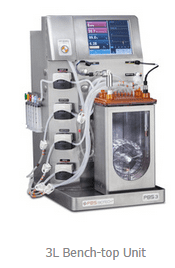 The vendors with posters all had booths, but there were also a couple of other vendors without posters.  Personally, it is important for me to see the display of Cell Therapy related products as it underscores the commitment to space.  The other booths/technologies included:

·  Pall:  With their recent acquisitions of both Solohill Engineering (THE microcarrier experts from Ann Arbor) and ATMI (several Cell Therapy relevant bioreactor platforms), Pall is positioning themselves as major players in cell therapy bioprocessing.  Both acquisitions came with excellent technical teams.  I really liked seeing the ready-to-use microcarriers (see pic above), as well as the Xpansion bioreactor and the iCELLis packed bed bioreactor.

·         Eppendorf recently acquired New Brunswick that just released a study of hMSC expansion in their BioBlu single-use bioreactors.  These bioreactors were on display, but they didn’t seem to be outwardly promoting them for Cell Therapy.

·         Sartorius Stedimhas several bioreactors and downstream processing tools, and they have recently acquired TAP Biosystems, that comes with a solid cell-therapy team.  I know the high throughput scaled-down ambr micro bioreactor system is in use at several cell therapy sites, and Sartorius officially has a Cell Therapy focus unit now, after several years of being interested in the space.  It will be interesting to see what they bring together.

I want to stress that Manufacturing Matters.  Improvements in Manufacturing Tools and Technologies are what drives scale-up and costs down, and when coupled with good, solid biology and product characterization will drive the sustainability of current industries and the development of new ones. RoosterBio is trying to help make this happen for the next generation of cell-based products and technologies.

We will follow up over the next week with some interesting takeaways from a few of the talks.  Stay tuned.

If there are any questions about the above info I will try to answer in the comments, or send you to the right person/company that is best suited to answer you.